“The Xiaomi brand is equivalent to re-starting a business.” Lei Jun has high hopes for the launch of Xiaomi 10.

In the afternoon of February 13th, in the live broadcast room of the Mi 10 series conference of Bilibili, when Lei Jun announced the final price of Xiaomi Mi 10 Pro, the “persuasion” barrage floating across the screen, and two A few months ago, the Red Rice K30 series announced a “true fragrance” when the 5G version was priced at 1999 yuan.

Although when Lei Jun released Xiaomi 9 a year ago, he said that the starting price of 2999 yuan was the last time Xiaomi’s digital flagship was priced at less than 3,000 yuan, but obviously, Xiaomi 10/10 Pro spanned the price of 4,000 yuan to 6,000 yuan. Still exceeded the expectations of many onlookers at the press conference.

In addition to the no-compromise pricing, the past two generations of Xiaomi’s digital flagship tops with unique transparent back shells have also disappeared. In all aspects of the product, the Xiaomi brand ’s flagship mobile phones are officially “extremely born for fever”. Ke Faner said goodbye and turned to for those business and high-end users who are looking at Huawei Mate / P series, Samsung S series, and iPhone 11 series.

For Lei Jun, this is a difficult decision. For Xiaomi, it is a necessary step. The Xiaomi brand needs to continue to go up, and Lei Jun also needs a victory.

5G encounters an epidemic, a tough battle at a difficult time

Whether you choose to directly increase the starting price by 1,000 yuan, or at this special time when the epidemic is still severely affected, you still insist on the pure online release of an annual flagship such as the Xiaomi Mi 10 series. Not an easy decision.

Before the launch of the Xiaomi 10 series, several market research institutions released the expected negative impact of the new coronavirus pneumonia on the mobile phone industry.

Strategy Analytics predicts that China’s smartphones will be released in 2020The volume of goods will be reduced by 5% than expected, of which the decline in the first quarter will exceed 30%. Mobile phone manufacturers will face the dual impact of declining demand in the Chinese market and insufficient capacity in overseas markets.

IDC also expects that the domestic mobile phone market will experience a year-on-year decline of more than 30% in the first quarter. In March, if the epidemic situation is stably controlled, the overall market will gradually enter a recovery period, but it will still be difficult to recover to the same period last year. IDC estimates that the domestic mobile phone market in 2020 will see a year-on-year decline of about 4%.

The emergence of the epidemic has once again cast a shadow over the Chinese mobile phone market, which has experienced an overall decline for several consecutive quarters. The potential wave of phone replacements caused by the first batch of Qualcomm’s 5G dual-mode flagship phones was also full of uncertainty. The impact of the down channel is obvious, and the online channel will also face the risk of delay or decline in consumer purchase demand.

At this special time, the mobile phone industry needs to boost confidence, and Xiaomi also urgently needs a flagship product to continue to implement the brand’s strategy.

From the first flagship Xiaomi Note that broke the 1999 yuan pricing to the Xiaomi MIX generation, which is considered to be the best time for Xiaomi to enter the high-end market, Xiaomi has not lacked the ambitions of the mid-to-high-end mobile phone market in the past, but each generation of MIX Almost all Pro and Pro products are tied to the over-emphasis on the cost-effective aura and the constraint of price. Except for MIX Alpha, which has not yet been mass-produced, Xiaomi’s previous highest price MIX3 only briefly touched the price of 4999 yuan under the support of the IP of the Palace Museum ceiling.

Today, after the rise of the prices of the three mid- to high-end models of Xiaomi 9, Xiaomi 9 Pro, and Xiaomi CC9 Pro in 2019, and the test of the configuration, Xiaomi finally came up with Xiaomi 10 with almost no short board in the configuration. Xiaomi Mi 10 Pro. 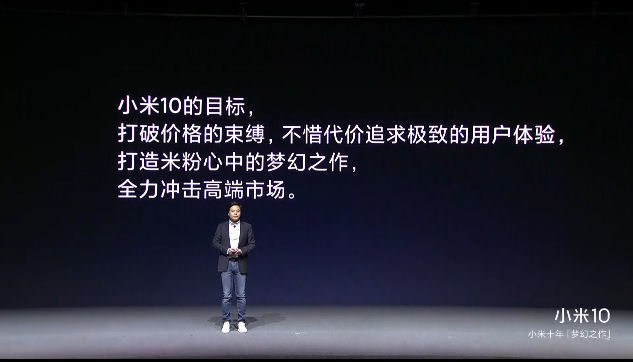 In the interview after the press conference, Lei Jun used a series of expressions to describe Xiaomi 10, “the work of the past 10 years accumulated”, “opening a new decade for Xiaomi”, “milestone work”, “Xiaomi impacts high-end It is not difficult to see that Lei Jun has high expectations for these two products.
p>

In the past, Xiaomi’s flagship mobile phones were often criticized for integrating only mature technology in the supply chain and lack of core technology accumulation in the Xiaomi Mi 10 series. It has also been improved. 10 billion yuan of R & D investment transcripts, and a lot of space to introduce the adjustment and optimization of Xiaomi 10 based on the screen, camera and other supply chain components, and showed 50W wired flash charging, 30W wireless fast charging and other self-research technology.

Xiaomi hopes to gradually establish a positive image in technology accumulation. This is the necessary support for the brand and product price exploration. It is also the catch-up route established by Xiaomi early, but it should be the key layout of the Xiaomi 10 series. Encountered the unexpected “black swan”.

Tight production capacity, offline channels cannot be widely spread, and consumer demand is falling. The competitive pressure brought by iQOO 3 and realme X50 Pro, which will also be released online in February, has intensified Xiaomi. The difficulty of opening the new pattern of Xiaomi brand for the 10 series.

During the press conference yesterday, with the announcement of the price of Xiaomi 10 by Lei Jun, the stock price of Xiaomi Group, which had fallen slightly less than 1%, quickly rose, and the intraday increase exceeded 5%, and finally closed up 3.56%. .

This reflects to a certain extent that the capital market is also optimistic about the new story of the Xiaomi brand going high-end. After the press conference, Lei Jun also said, “The Xiaomi brand is equivalent to re-starting a business, and Xiaomi 10 is the first to re-start a business.” 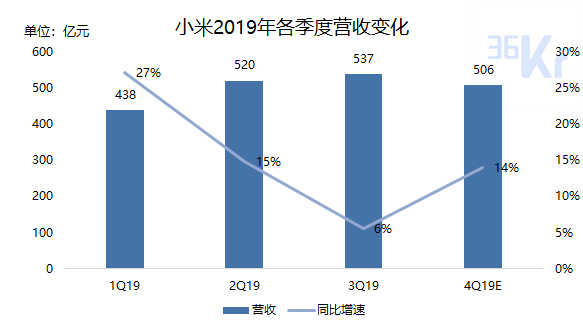 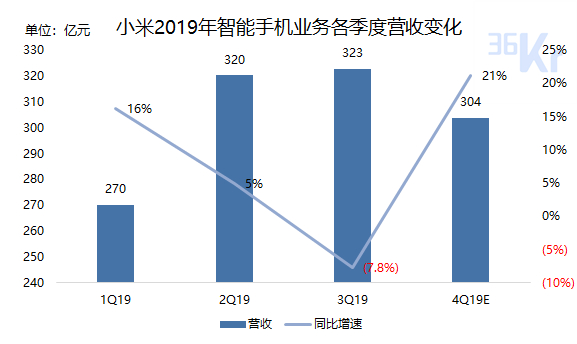 Before the launch of the Xiaomi 10 series, Xiaomi disclosed in a voluntary announcement that its estimated revenue in 2019 will exceed 200 billion yuan. 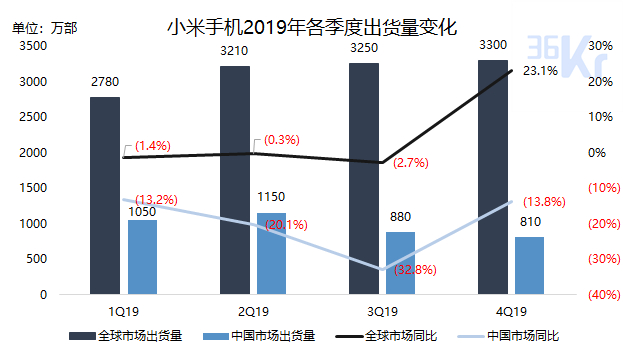 This means that Xiaomi’s smartphone business seems to be out of the predicament of declining revenue growth, but from the shipment data of market research agency Canalys, it can be seen that after four consecutive quarters of year-on-year decline, Xiaomi China Mobile The market shipments account for less than 1/4 of the global shipments, and the number of domestic mobile phone users is exactly the part that Xiaomi’s Internet services rely on most.

In the fourth quarter of 2019, Xiaomi’s contrarian growth in the global smartphone market exceeded 20%. It relies on Xiaomi’s strong performance overseas, especially in the European market. Xiaomi’s smartphone business can only say that it has a foot in the overseas market. Already out of the quagmire, and in the domestic market, Xiaomi’s mobile phone still needs a victory, which is also what the Xiaomi brand needs to do after a year of dormancy.

The more important task of the Redmi brand is to stabilize the basic disk of the Xiaomi mobile phone in the past. Acquisition Incremental users and make more room for Redmi to play. Performance in the high-end market.

Lei Jun also mentioned in the interview that Redmi will inherit the tradition of Xiaomi and adhere to the ultimate cost performance. At the same time, it will also tactically treat the standard merchants to prevent them from adding chaos to the Xiaomi brand, while the Xiaomi brand is free of price restrictions. Impact on the high-end mobile phone market. Lei Jun said that Xiaomi is pursuing “first to convince everyone on technology and products, and then to recognize the brand, tone and feelings.”

Two months before and after, 1999 yuan “True”Xiang” Redmi K30 5G proves that after the inevitable rise in component costs in the 5G era, Xiaomi is still capable of making cost-effective mobile phones and playing the role of “5G ubiquitous” at a relatively low price. Now Xiaomi Mi 10 Pro, which costs 5999 yuan to dismiss, needs to let users know that Xiaomi is determined to stand firm in the high-end mobile phone market. The Xiaomi Mi 10 series is just the beginning of Xiaomi’s impact on the high-end market with technology and products. It will take longer to accumulate.

This is destined to be a protracted battle, and Xiaomi must go more firmly to avoid the mistakes from the “stunning” MIX generation to the “passers” of the third generation.