The story of “600 million people are using it” is a lot, and the story is still beautiful.

Crashing with Ali, Pinduoduo also released its first quarter earnings report for 2020 on May 22.

The number of active buyers in Pinduo for many years reached 628 million in this quarter, a net increase of 42.9 million from the previous quarter. The step is becoming “a lot of Pindu that is used by 600 million people”, which is only the same as Ali ’s 726 million To 100 million.

Even if the loss far exceeds market expectations, from the point of view of stock price performance, investors are still “not mindful”. On the day of the financial report, Pinduoduo rose against the trend when the Chinese stocks fell together, and the closing price reported US $ 68.7, an increase of 14.5%, and the market value reached US $ 822.77 billion, exceeding JD.com by nearly US $ 9 billion.

Even though a large number of users and users were unable to get out of the door due to isolation at home, Pinduoduo still achieved decent new user growth.

The annual number of active buyers is refers to the number of consumers who have placed at least one order on Pinduoduo in the past 12 months, including independent apps, applets and H5 and other mobile channels. In the first quarter of 2020, Pinduo’s multi-year active users reached a milestone of 600 million, an increase of 185 million from the same period last year.

As you can see from the chart above, the growth rate of live users after many years after 2019 tends to be flat. The 41.69% year-on-year growth rate in this quarter is still slightly higher than the previous three quarters. The 42.9 million new users have also maintained high growth in the first two quarters, especially in the relatively low-season industry background in the first quarter.

Another set of data is that during the financial reporting period The average monthly active users of Pinduoduo’s independent apps is 487 million, which is only 5.5 million more than the previous quarter, compared with 51.9 million new monthly active users in the previous quarter. This means that , Most of the new users of Pinduoduo in the first quarter came from WeChat. During the same period, the number of new users on JD.com ’s entire platform was 25 million. It can be said that also has WeChat portal The entrance gave the sinking new business Jingxi, Pinduoduo still seized the opportunity better than Jingdong.

The annual GMV of Pinduoduo reached 11.572 trillion yuan, an increase of 108% year-on-year, and the single-season GMV was as high as 99%. It should be pointed out that during the month of the epidemic, most of the express delivery was suspended except for Post, SF Express, JD.com, and Suning. Pingduo was unable to ship normally due to the direct impact of logistics, but This effect is reflected in the performance of GMV data, which is somewhat inconsistent.

Pindo Strategy ’s vice president David Liu explained at the earnings call that the domestic epidemic was gradually brought under control from the end of February to the beginning of March, coupled with the restoration of merchants ’promotion and logistics capabilities, consumer demand was quickly restored and released. < strong> By mid-March, the daily order volume of Pinduoduo reached 15 million; users increased their purchase frequency, and the sales contributed by each user also increased.

According to the financial report, Pinduoduo ’s average annual expenditure for each active buyer was 1842.4 yuan in the first quarter, with a slight increase. Last quarter, this figure was 1720.1 yuan; the same period last year was 1257.3 yuan, an increase of 46.54 %. In terms of consumption frequency, Pinduoduo officially opened live broadcast tools to merchants in January, which lowered the threshold for users to purchase jewelry, seafood and other products, and can drive user participation and improve user repurchase.

In terms of category, Apparel and FMCG, which account for the largest proportion of Pinduoduo, have a certain impact on clothing sales; but at the same time, tens of billions of subsidies have driven the growth of cosmetics and consumer electronics. White appliances may not be able to be installed in the warehouse during the epidemic, but small appliances can be sold as usual, which can still drive the average expenditure of active users for the original low unit price of Pinduoduo.

Another source of GMV’s rapid growth is factory customization. Pingduoduo ’s “new brand plan” continues to expand, and it is expected that the number of members participating in custom research and development will reach 1,000 by the end of this year; during the epidemic, the export volume of these foreign trade factories dropped sharply , Pinduoduo transferred the manufacturer’s sales market back to the domestic market, which means export to domestic sales.

Investor: Loss is not a big problem

The core indicators of Pinduoduo are impressive, but the loss data is not very good.

Before the financial report was released, Citigroup, Bank of America Merrill Lynch and other agencies predicted that Pinduoduo ’s marketing expenditure might exceed the warning line, so they downgraded the Pinduoduo rating. But what really reflected in the secondary market, investors gave an unexpected feedback- pushed the market value of Pinduoduo above Jingdong. In the past two months, Pinduoduo has doubled its share price.

Looking at the reasons for Pinduoduo ’s high losses this quarter, except for the tens of billions of subsidies, most of the rest are not long-term. The reason for the loss comes from the massive subsidies that Pinduoduo provided to medical supplies and agricultural products during the epidemic.

Specifically, due to the pressure of the outbreak, merchants have reduced marketing promotion and advertising expenditures. During this period, Pinduoduo launched an incentive plan, reducing the commission rate and reducing the marketing costs of merchants on the platform , and Launched the “Anti-epidemic Channel”, and inclined free traffic resources to emergency medical supplies such as masks, thermometers, antiviral granules, etc. This has doubled the growth of Pinduoduo GMV, but the revenue growth rate has fallen seriously and hit a record low. < / strong> 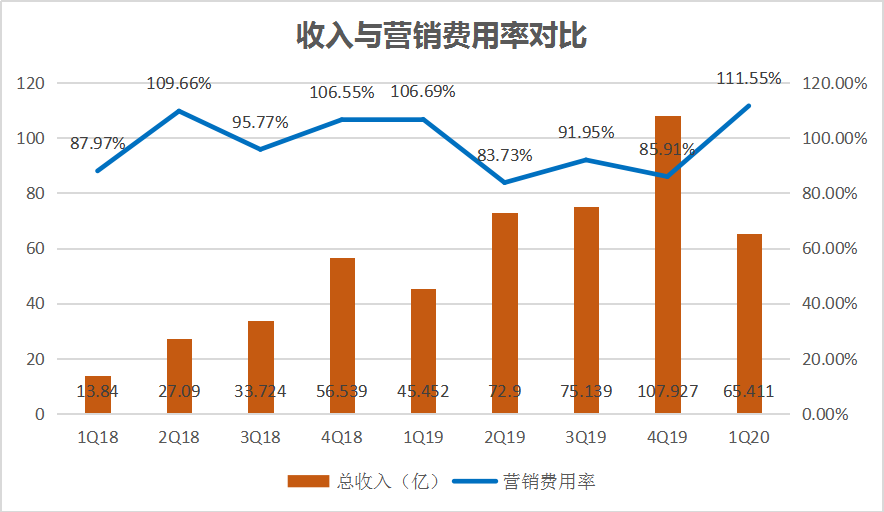 On the other hand, Pinduoduo issued a notice to the express delivery company to provide targeted subsidies to the logistics orders that meet the statute of limitations and involve the “tens of billions of subsidies” and “guarding health and sharing difficulties” anti-epidemic channels. There is no upper limit for subsidies. To support the live broadcast business, Pinduoduo has also invested heavily in cloud services and broadband costs. This has led to a sharp increase in the sales cost of Pinduoduo in the first quarter. The sales and marketing expenses reached 7.297 billion yuan, and the marketing expense ratio rose to an unprecedented 111.55%.

Duo Duoduo said that the company has sufficient cash reserves and the tens of billions of subsidies will continue, and it will continue to expand the number of subsidies and commodities. David Liu emphasized that since 2016, Pinduoduo ’s annual operating cash flow has been positive and will not use investor money to subsidize users.

(The picture in this article comes from Pinduoduo)

If you are an e-commerce, retail, and tourism industry practitioner, please contact me. My WeChat is CQ_Beatles. Please add your name, company and position.