Nearly half the world’s people do not online, because of the high cost

2 A report jointly issued by the International Telecommunication Union and the A4AI Alliance shows that my country’s fixed broadband user burden ranks the fourth lowest in the world, and the cost of mobile broadband usage in my country is also lower than the global average.

The new round of speed increase and fee reduction is in deepening progress. The State Council executive meeting held on April 7 required the implementation of the requirements of the “Government Work Report” to further promote network speed and fee reduction, and improve network and service quality.

my country began to carry out speed-up and fee-reduction actions in 2015, and it has entered its 7th year by 2021. So, after all these years of continuous speed-up and fee reduction, is my country’s communication tariffs expensive or cheap? Is it high or low internationally?

The report shows that, whether it is mobile broadband or fixed broadband user usage costs, my country is far below the global average. Especially for fixed broadband, the cost of Chinese users only accounts for 0.51% of the monthly per capita gross national income, which is far below the global level of 2.9%. It ranks fourth in the world according to the proportion from low to high.

01 The burden of fixed broadband is the fourth lowest in the world, and my country’s communications tariff is relatively low in the world

The report does not simply compare the unit prices of Internet broadband tariffs in various countries and regions, but uses the user’s Internet access cost as a percentage of monthly per capita gross national income as a measure, which is more convincing.

Look at the price of fixed broadband first. Globally, the median price of entry-level fixed broadband (providing at least 5GB of traffic and at least 256Kbps and above) accounts for 2.9% of the monthly gross national income per capita. Although this figure is 0.2% lower than last year, butCompared with the 2% affordability target proposed by the United Nations Broadband Commission for Sustainable Development, there is still a big gap.

Specifically in China, the median price of entry-level fixed broadband accounts for 0.51% of monthly gross national income per capita, which is far lower than the global average (2.9%). Ranked from lowest to highest price, my country ranks globally fourth. 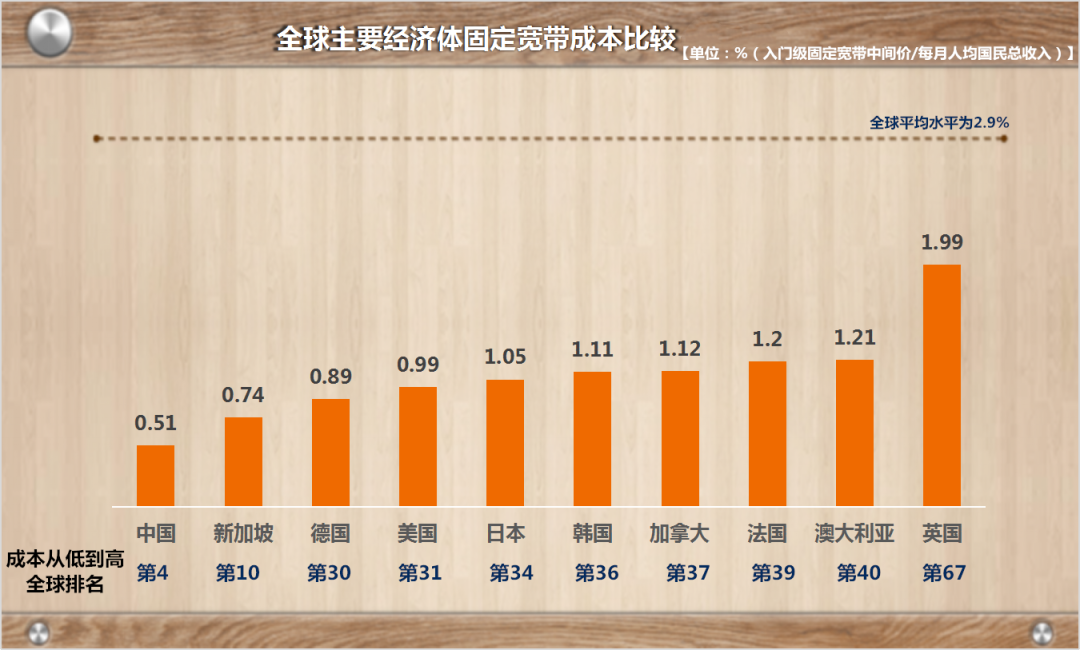 It can be said that the burden of fixed broadband access for Chinese users is quite light, far lower than Singapore (0.74%), the United States (0.99%), Japan (1.05%), and South Korea (1.11%). If you compare the low-ranking countries or regions, it’s a huge difference. According to the report on Affordability of ICT Services in 2020, Madagascar ranks at the bottom of the list in descending order of price, with fixed broadband spending accounting for 163.41% of per capita national income, followed by Niger (111.54%) and Mala Dimension (108.1%). In other words, in these countries, for ordinary people, they can’t get online without eating or drinking.

In terms of mobile broadband usage costs, my country is also lower than the global average.

Arranged in descending order of usage cost, my country ranks 31st in the category of “data traffic only” mobile broadband (providing 1.5GB traffic, 3G or higher network), with expenditures accounting for monthly per capita nationals Total revenue is 0.51%, while the global average is 1.7%.

Facts have proved that my country has vigorously promoted speed increase and fee reduction for many years and has achieved obvious results. Broadband prices are at a relatively low level in the world, removing the “expensive cost” hat.

02 Nearly half of people are offline, and global digital inequality is still prominent

In one month, 517 World Telecommunications and Information Society Day is approaching, and the ITU has determined the theme of 517 this year, which is “Accelerating Digital Transformation in Challenging Times”.

I have to say that this is a very challenging task. The new crown pneumonia epidemic has highlighted the startling digital inequality in different countries or within one country. The “ICT Service Affordability in 2020” report shows a large number of digital inequalities, especially in terms of Internet access. 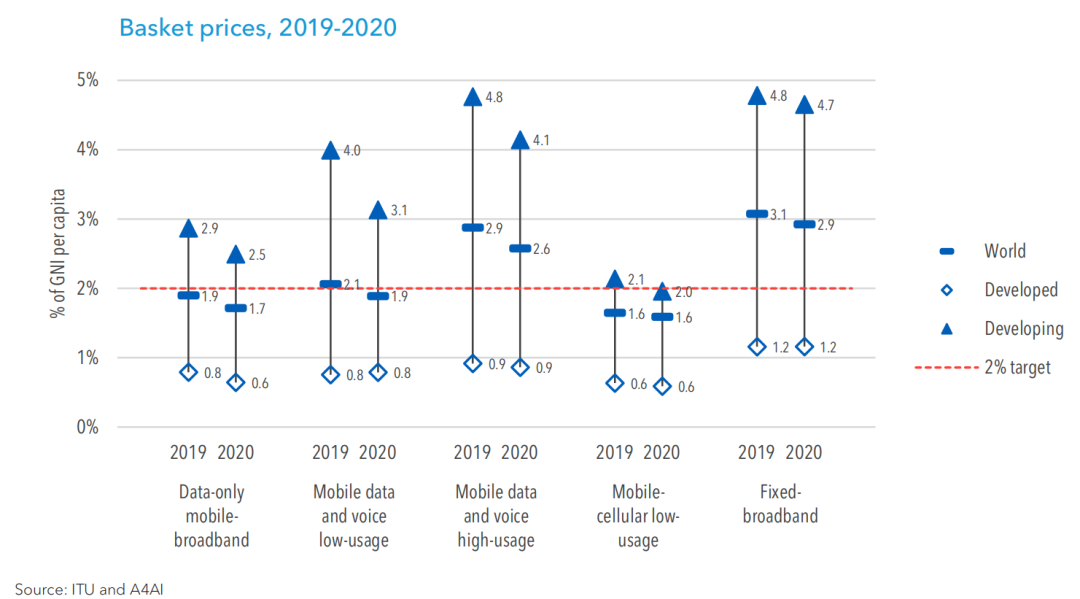 The high cost of Internet access is still a “blocker” that hinders the use of ICT services around the world. The ITU and A4AI alliance stated in the report that although the 4G network covers about 85% of the world’s population, in 2020, nearly half of the people will be offline because the cost of connection expenditure is too high.

ICT services in most LDCs are still prohibitively expensive, and the affordability gap between developed and developing countries is very obvious.

In terms of mobile broadband affordability, there are significant differences in different regions. Taking the “data only” mobile broadband as an example, from the analysis of the indicator that connection expenditure accounts for monthly gross national income per capita, it is 6.4% in African countries, 2.4% in the Americas, and 1.4% in both Arab countries and the Asia-Pacific region. , Compared with 0.6% in Europe. The gap between different countries in different regions is also obvious. Take Africa as an example. The average consumer in Egypt only needs to pay 0.5% of the income per month to get 1GB of traffic, while the consumer in the Central African Republic needs to spend the income. Of 24.4%.

The ITU stated that in 2020, of the 33 least developed countries with statistics, only 1 country can afford entry-level fixed broadband Internet, and the affordability gap between developed and developing countries has further widened. Big.

Moreover, in terms of broadband speed, the gap between developed and developing countries is also widening. The Affordability of ICT Services in 2020 shows that the median speed of entry-level fixed broadband connections in developed economies increased from 30 Mbps to 40 Mbps last year, while developing countries only increased from 3 Mbps to 5 Mbps.